As teams get more comfortable with refactoring, I often see them practicing what I call speculative refactoring. When they encounter code that is ugly, indecipherable, or too complicated, they decide to refactor it. The problem is, this code has nothing to do with what they are currently working on. As much as I like to encourage the motivation to improve, this is a trap that leads to taking on risk without any of the rewards to the business.

I recommend techniques like Opportunistic Refactoring and Preparatory Refactoring where the focus of refactoring is in support of adding the feature or business value currently being created. The concept of Opportunistic Refactoring, from Martin Fowler, is that the focus of refactoring is on the code that is actively being modified to develop a particular feature. Areas of the application that require the most change get the most time for refactoring. This creates a virtuous cycle; the code that needs to be changed most often will also be improved most often.

In addition to Opportunistic and Preparatory refactoring, Bob Martin’s Boy Scout Rule, and Kent Beck’s formulation (see below) also share the same idea: that refactoring should be improving code that is currently being worked on.

for each desired change, make the change easy (warning: this may be hard), then make the easy change

Implicit in these types of refactoring workflows is the idea that we don’t treat refactoring as a separate project. The project refactoring idea introduces several problems, including the idea that we can clean up the code sometime in the future. This is akin to only cleaning your dishes once your sink is full of dirty dishes and overflowing. Instead, opportunistic refactoring techniques encourage building the habits and skills for daily improvements to the code. It helps teams practice and learn the value of continuous improvement, a key component of lean. If technical improvements (i.e., technical debt paydown) or design improvements aren’t in support of delivering better experiences (e.g., operational stability, performance, etc.) or more value to customers, I would question their merit.

We refactor the code that impedes us, not all that offends us.
— Tim Ottinger

High-Wire Act Without a Net

Teams who focus on refactoring code that has nothing to do with the business value they are currently delivering are creating undue risk for their organization. Speculative refactoring often takes place in legacy systems that are largely untested (or don’t have microtest-level coverage). This creates perfect conditions for bugs to breed. Code being changed without a microtest suite, and without being bundled with visible business value, creates an environment where changes can often go into production entirely untested.

Some will argue that they don’t need to rely on Opportunistic Refactoring techniques, nor do they need an automated test suite, if they are using safe refactorings (e.g., leaning on a refactoring tool, like Resharper). While I do think refactoring tools are important and indispensable, they can create a false sense of security.

Michael Feathers describes the Legacy Code Dilemma in his book, Working Effectively with Legacy Code. Often, the code needs to be changed without tests in order to get tests around the code, and this is indeed a place where we rely on automated refactoring tools. The difference in what Michael Feathers is describing is that this refactoring is in support of a feature that is being added, not speculative.

The changes without tests are just the first of several steps to get characterization tests around the code. These characterization tests (sometimes called pinning or pindown tests) are the scaffolding to ensure no behavior changes occur while the team refactors the legacy code. Once the scaffolding exists, the code is refactored to improve its design and to get it microtested. This code will, in relatively short order, be under the scrutiny of a suite of automated tests and hopefully exploratory testing as well. 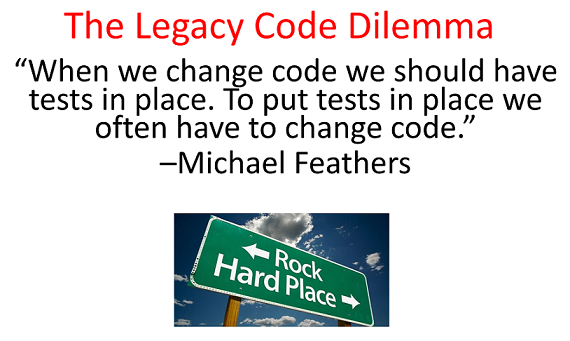 There is one situation in particular, where I recommend code changes and refactorings that aren’t tied to adding business value or features. It is what, Industrial Logic senior consultant, Mike Rieser calls The Last Mile. Let’s take a look at an example.

A team has been using the same ORM (Object-Relational Mapping) since they started building their application several years ago. As third-party ORMs have improved, they have discovered that adopting a new ORM will reduce the amount of custom infrastructure code that needs to be written. Adopting a new ORM will make not only developing but maintaining features, faster and safer. The team has rightfully decided to avoid big-bang, all-or-nothing infrastructure replacements. Noting that they most often fail and leave large amounts of code in branches, not being integrated, for weeks or months at a time.

Instead, they decide to use opportunistic refactoring techniques. When a new feature is added or an area of the code is modified, the team includes the work to refactor the infrastructure code necessary to transition to the new ORM. This workflow is part opportunistic refactoring, and part infrastructure improvement, but should not change any user-visible behavior of the system. After six months, 80% of the application has been converted to the new ORM. However, the team has a dilemma. They now need to support two third-party ORMs. The areas of the code that aren’t using the new ORM are the areas that are rarely changed. So, they may indefinitely need to support both ORMs if they only rely on opportunistic refactoring techniques.

The work that is required to replace the few instances of the old ORM is known as the Last Mile, and a commonly required final step in larger infrastructure and architecture changes. It is preferred over Big Design Up Front (BDUF), all-or-nothing projects, that are still common in organizations that have not adopted evolutionary design and emergent architecture practices.

There is nothing so useless as doing efficiently that which should not be done at all.
— Peter Drucker

Refactor code in support of the work your team is currently doing. Great software design is measured by how safe and simple the code is to change, maintain, and understand. We rarely know exactly how we will need to change the code in the future. Software design is a process of tradeoffs. Some designs make one kind of change easier at the expense of another. Refactoring is a vital step to always keep the code’s design optimal for the kinds of changes that are required, without needing a crystal ball.

Taking this approach, it becomes obvious that refactoring code without a business purpose is problematic. In the absence of a business goal, refactoring is just incurring risk and certainly not the best use of the team’s time.