I’ve read about Ping Pong Pair Programming as far back as 2002. However, I didn’t begin to practice it until I joined an eXtreme Programming (XP) team. I quickly took to the practice, finding it incredibly engaging and enjoyable. As someone who values collaborating with other developers this was collaboration at a level I had not previously experienced. Furthermore, this constant and close collaboration built a camaraderie with a team of developers which I have not been able to replicate since. There are about eight to ten developers with whom I’ve worked that I feel an incredible bond with as a result of constant pair programming over a significant period of time. These are folks I would jump at the chance to work with again. 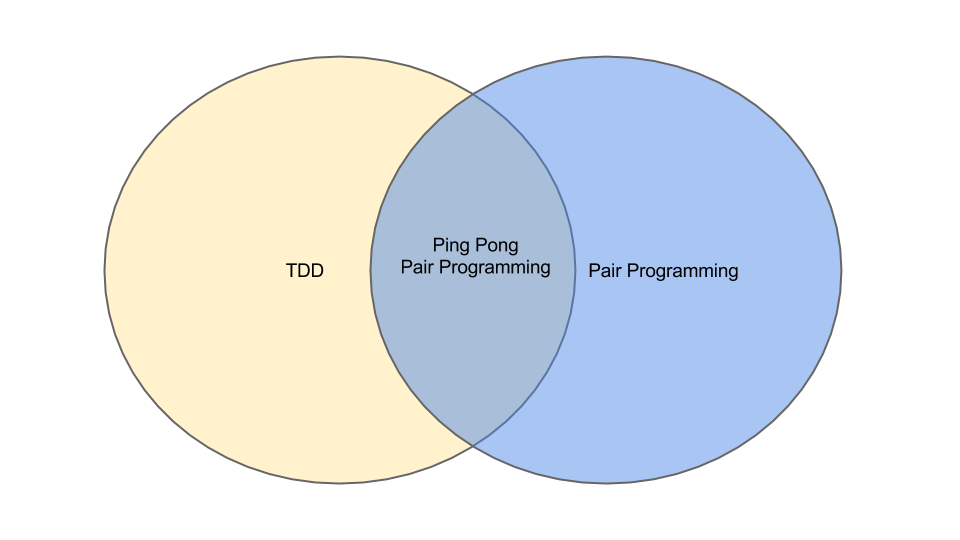 Ping pong pair programming is deceptively simple. Given two developers, Developer A and Developer B:

One of the biggest struggles I see with development teams trying to pair program is that they don’t properly setup their development machines to accommodate this way of working. The optimal setup is a single computer with two input devices. That’s two monitors, two keyboards, and two mice. Frankly I won’t pair unless there are two input devices because I find it uncomfortable to work having to pass them back and forth between developers. 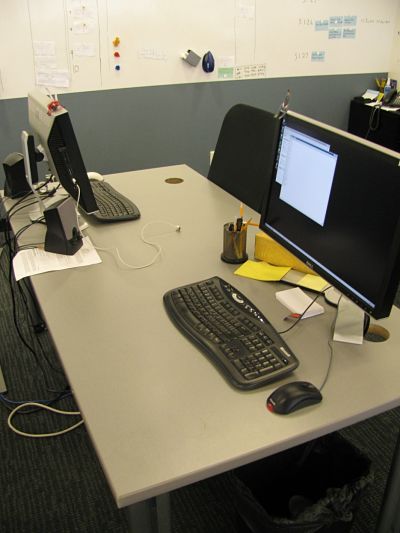 Another very important aspect of pair programming is how the pair of developers are seated in relation to one other. The worst way to sit while pair programming is one developer in front of the other sharing the same monitor. Both developers need to be comfortably seated and able to take control of the computer at any point in the pairing process without any additional effort. The most common seating arrangement is two developers seated next to each other. While I don’t find this to be the optimal seating arrangement, it is usually the easiest in work environments that weren’t designed with pair programming in mind. I do however find myself resorting to it more often than I’d like to.

The ideal seating arrangement that I’ve found through experimenting with a previous team is sitting either directly or diagonally across from one another. This enables pairs to easily look at the screen and look directly at each other at all times during the pairing session (see the photo of one of our pairing workstations).

I consider the biggest benefit of Ping Pong Pair Programming is how quickly the pair achieves flow. Flow is an important concept in programming. It is the point at which the problem space is completely loaded into the head of the developer and they begin making the most efficient progress on the solution. Any interruption at this point sets the developer back.

In a pair there is typically one developer who knows more than the other either about the domain, the problem currently being addressed, the technology stack, or even programming in general. This mismatch could lead to poor pair programming sessions with the more experienced programmer dominating the keyboard.

Ping Pong Pair Programming avoids these issues as each developer is taking turns writing tests and making them pass. If the developer is unclear about what test to write next or how to make a specific test pass this prompts a conversation.

Given that conversations are constantly happening in the pairing session this is a very natural way to incorporate mentoring into your team. This type of mentoring is more effective than mentoring sessions between developers and managers in private one-on-one meetings. Don’t get me wrong, you should be having one-on-one meetings with your manager, but the real mentoring should be happening while building the software. By pair programming, mentoring is something that is occurring constantly and naturally between developers of different skill levels. Additionally, learning new techniques, 3rd party libraries, tools, team practices, team coding conventions, etc. becomes very easy and built-in to the pairing process.

Some teams will even stop performing code reviews and allow the review to happen during the pairing session. I believe this is entirely dependent on how often your team switches pairs. If one pair commits to a user story and only finishes pairing when the story is complete I think that code should be reviewed. As Bryan Helmkamp stated in his Baruco 2013 talk both developers in a pair are the authors, therefore they still require an editor. However, if many developers on the team have worked on the user story through regular pair rotation the code review becomes redundant.

I am a huge advocate of TDD. I have had a lot of success with it and I have yet to find a situation in which I do not want to utilize it. Test-Driven development, while conceptually simple, takes a fair amount of time for developers to get truly comfortable with. There are some common struggles that developers new to TDD experience. These include:

Even the act of just writing the test first is something that is a challenge for developers who haven’t worked that way previously. All too often “unit tests” that inexperienced developers write are impossible to maintain, impossible to reason about, and end up being an opposing force instead of an enabling force in the organization. These are situations where teams give up on unit testing and decide “it didn’t work for us.” See one of my previous posts for more on this topic, xUnit is Not Unit Testing.

Being introduced to TDD in a ping pong pair programming situation is the fastest way for a developer to get up to speed and comfortable with the practice.

Pairing with a seasoned TDD practitioner, developers new to the practice will learn:

From the perspective of the uninitiated developer this can seem silly or wasteful. If you know how the code is supposed to look why wouldn’t you write it that way in the first place? But what looks like a game from the outside is a very important part of TDD and pair programming. It is doing the absolute minimum to make a test pass and no more without another failing test.

When I first started Ping Pong Pair Programming we switched pairs on the team twice per day (two four hour sessions). In the early days of XP teams tended to keep the same pairs throughout an iteration. Switching pairs regularly has several benefits over keeping pairs together for the duration of an iteration. It alleviates the need for code reviews (as mentioned previously) and it spreads knowledge throughout the team very quickly. In my experience, every developer on the team paired with one another, thus there were no “favored pairs.” Very rarely would a user story be completed in a single pairing session, this resulted in a true team-owned solution and team accountability for the success of every user story.

Thanks to my friend and colleague Nick Goede for the photo of our pairing workstations from his Barcamp Philly presentation.